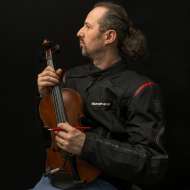 Marco Fedalto (Treviso, 28 August 1978) is an award-winning composer. He obtained a bachelor's degree in Piano, Scoring for Band, Scoring for Audiovisual and a master's degree in Composition (Mozarteum University, Salzburg). He has also attended the Hollywood Music Workshop in Vienna, as well as the Los Angeles Film Conducting Intensive.

He has received a nomination for the “Reel Music Awards” during the 2018 IFMA Annual Conference, and has composed for many musical genres; such as, opera, film music, chamber music, theatre, electronic music, contemporary music, pop and many other soloist pieces.